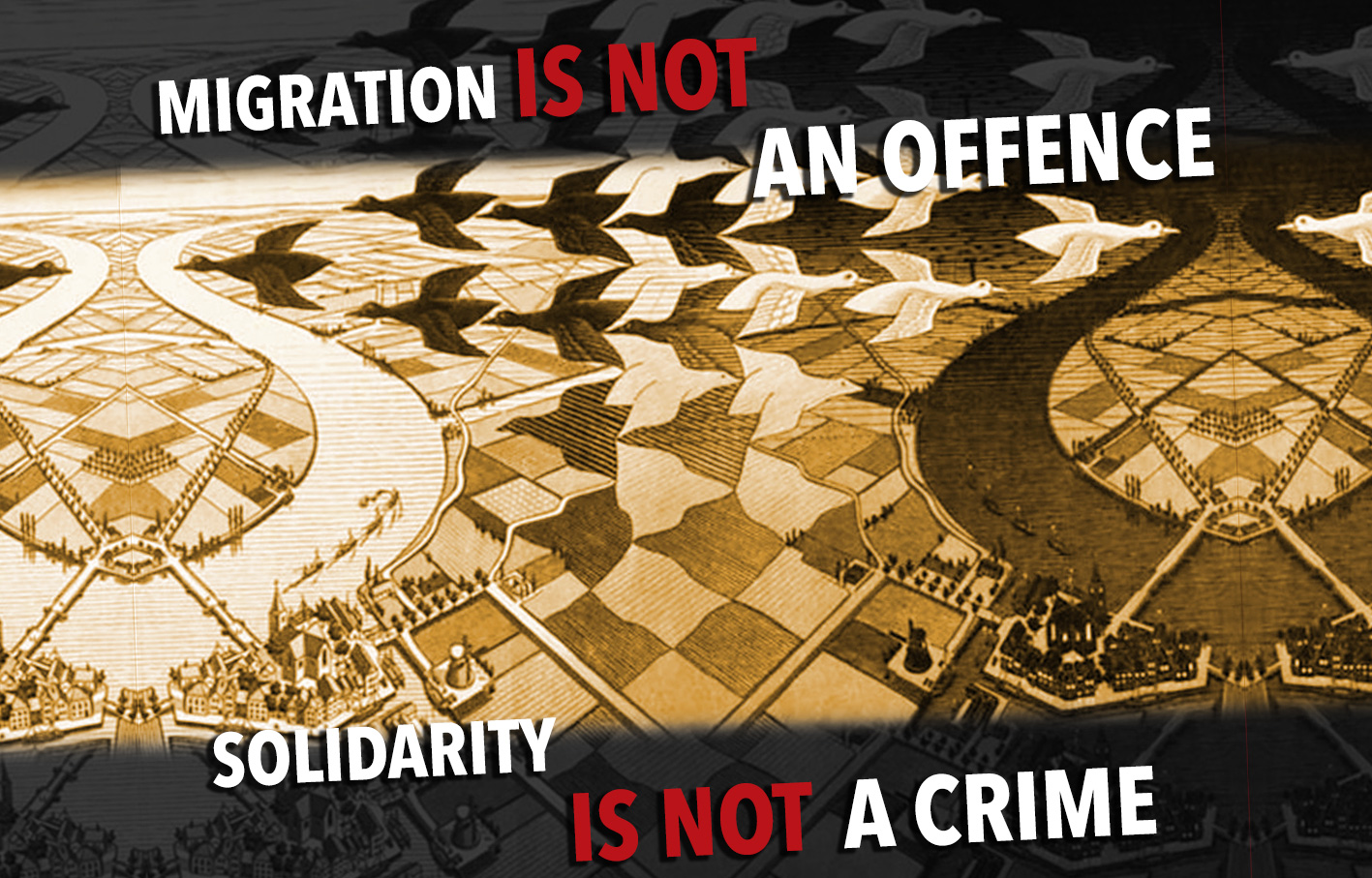 MIGRATION IS NOT AN OFFENCE, SOLIDARITY IS NOT A CRIME!

Shantytowns out in the countryside, with no water, heating or electricity. 12-hour work shifts in the fields. Starvation wages and contracts that systematically turn out to be fake. And continuously, people being assaulted, and dying on the roads or in the fires burning their tents and shacks. These are but few of the extremely harsh conditions in the lives (and deaths) of thousands of people coming to Italy, especially Southern Italy, from other countries, from Romania to Senegal. Their working conditions are similar to those endured by many Italians, but worsened by the fact they are not citizens, with all that this entails, in terms of access to rights and services.

For many years now, the people living and working in the farms of world-famous “Made in Italy” food produce, especially in the areas of Foggia (Apulia) and Gioia Tauro (Calabria), have been advancing their demands to institutions – from municipal and regional governments to police headquarters and prefectures, and even the Ministry of Interior. The main demand has always been for everybody to obtain a document (permesso di soggiorno), so that they could get work contracts, and perhaps also change job, travel or rent a house, and many other things that so many people take for granted. The indifference of institutions to such basic demands, which often the law on paper already grants, pushed the workers of those farms and their allies towards protest actions, well-aware that only unity and determination can achieve the desired results.

On the 6th of December 2019, supported by the solidarity of tens of people from different Italian cities, the farmworkers organised another powerful strike that resulted into the blockade of both the gates to Gioia Tauro’s harbour, and of Foggia’s industrial zone (and the nearby highway). Notwithstanding the additional dangers caused by the government’s recent approval of two new Security Decrees, the 6th of December was a day of fearless and powerful struggle, significant and necessary for everyone in the country, not just immigrants: any victory achieved by peoples’ struggles is contagious. In the same way, those exploiting and profiting off the status quo are skilled at using any deterioration in someone’s situation to deter and threaten everyone else, in a vicious downward cycle. The 6th of December, both in Apulia and in Calabria, the police charged and beat the striking workers: in Foggia, a person was arrested, and released only after having been violently beaten. In Gioia Tauro, a car run over some people in order to force an opening in the blockade. Among those who were run over, after an ambulance brought him to the hospital where he was inadequately treated, the most severely injured demonstrator was brought directly to the police station to see criminal charges pressed against him.

After a couple of weeks, a relentless stream of repressive actions started hitting all those involved, and continues to do so to this day. People living in slums were forced by the police to undergo mass registration, each time with a different pretext, with tens of police cars surrounding their homes. Those who stood in solidarity to the farmworkers, instead, were subjected to “fogli di via” (police orders prohibiting the return to one or more municipalities, in these cases for 3 years), but also criminal charges pressed against them, cautions, and fines ranging from 1000 to 4000 euros, on top of daily harassment by the police in their home towns and cities. This story, like many similar ones that are taking place in Italy and beyond, paints a clear picture of the violence of the system we live in: if you are exploited and live in precarious conditions, and so you organise with others enduring the same suffering to improve your situation, not only do you see your demands being ignored, but as the only answer: you are punished.

Clearly, people who struggle to get what they are entitled to, finding the strength to never give up notwithstanding the exploitation, the violence and the isolation they face, are threatening. As are those who support and stand in solidarity with these struggles, because they understand that these struggles are theirs as well, the same struggles over work and housing that are fought elsewhere. But even more, what is feared is the dialogue between Italians and immigrants. For years, the latter have been described as The Problem, bearers of criminality and thieves of houses and jobs (and often also of women, depicted as a commodity privately owned by this or that person or group). All the while, the real problems are constantly exacerbating, as we must endure one of the most precarious labour markets in Europe, a school and university system left with no funding, and some areas of the country abandoned to a complete absence of services.

We must organise and support each other. Solidarity comes in many forms. The struggles in the ghettoes of Calabria, Puglia, and other regions are not slowing down, and the people animating these struggles continue to meet, to discuss and to organise themselves. The solidarity fund “Cassa di Solidarietà – La Lima” supports (and not merely financially) those and other struggles, as well as other people hit by repression because of their life at the margins. Moreover, since we are now forced to face massive legal expenses, you can support us by directly sending a contribution through the donate (“DONAZIONE”) button on our website campagneinlotta.org.

The time has come to join forces and to muster up our rage: let’s raise our voice to make sure we are heard. NO to Security Decrees! NO to repression, NO to the criminalisation of solidarity!

Documents and freedom of movement for all!